It looks like one of the latest strains of ransomware may be flawed.

Securelist.com explain the some facts about the Torlocker ransomware as follows “Our analysis has shown that Trojan-Ransom.Win32.Scraper was presumably written in assembler, which is unusual for this type of malware. The Trojan uses the Tor network to contact its “owners” – something that is apparently becoming a norm for the new generation of ransomware – and the proxy server polipo. This piece of malware often lands on users’ computers via the Andromeda botnet.

Trojan-Ransom.Win32.Scraper encrypts the victim’s documents and demands a ransom ($300 or greater) to decrypt them. If the malware gets deleted by a security product after the files are encrypted, the Trojan installs bright red wallpaper on the Desktop, containing a link to its executable file. Thus, users have a chance to re-install the Trojan and report to its owners that they have paid the ransom: to do so, users need to enter payment details in a dedicated TorLocker window. This data will be sent to the C&C server which will either reply with a private RSA key or notify that there was no payment.”

A Screenshot from the Ransomware encryptor is shown below 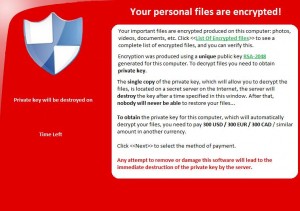 In general they say that although the ransomware encrypts all files with 256 bit encryption, that in most cases (over 70% tested) that they can be decrypted due to errors made in the cryptography algorithms!

To decrypt the files, Kaspersky have developed a application called the ScraperDecryptor utility which can be downloaded from http://support.kaspersky.com/viruses/disinfection/11718